Look what I found, hiding on the top of our kitchen cabinets no less.  Finding this brought back so many memories of growing up out at the ranch with my Mother and Step-Father.  I remember Mom would fry everything in a cast iron skillet and I mean Everything!  Anything from fried potatoes for breakfast then the next day fryin up some sliced up potatoes and onions to go with dinner.  My favorite out of everything was the fried chicken, mmmmmmm, how I miss my Mother’s fried chicken!  Oh, and her chicken fried steak.  Oh yeah, so damn good and I could just kick myself for not remembering how she fried it up and was able to keep the breading on the meat, every single time!  It’s not that I didn’t pay attention, I loved learning how to cook from my Mother and she was a very good teacher, it’s just that sometimes my stuff doesn’t come out as well as hers did.  She would show me two or, if I was lucky, three times, how to make something then after that, it was me in the kitchen and her sitting in the family room giving me step-by-step directions.

Once I was on my own, got married and all, and out of all the pots and pans I have ever bought thru out the years, I have never spent money on my very own brand new cast iron skillet.  Shocker, I know!  Me, a country girl not owning One cast iron skillet, shame on me.  Well, I own one now.  I didn’t buy it even though now, if I remembered that they become non-stick the more you use them, uuuummmm, yeah, I would have bought one a long time ago.  Just one of the things I hate about getting older…. I have developed C.R.S. Syndrome.  I’m sure most of you know what that is, right?  Being that I try to keep my Blog a “G” to a “PG” rating I can’t spell it out. LOL

Let’s see, what else did I wanna blab about regarding my childhood and the cast iron skillet. LOL   Sounds like the title of a book doesn’t it. LOL   Well, I think it does.  Oh, I also learned you could actually make desert in this kind of pan!  To be more specific, Peach Cobbler.  I thought for sure when my Mom told me to get out the cast iron skillet for this that she was joking,  nope, no joke.  I just knew she was going to make this yummy desert, which we had one special pan for making it in, was going to be ruined if we baked it in that pan!  The skillet that we make fried chicken, chicken fried steak, pork chops, bacon, sausage, sausage gravy, fried potatoes, onion rings, steak fries in, the list goes on and on.  For all the garlic and onion powder, salt and pepper, all the spices that go into savory dishes I just knew that my favorite desert wasn’t going to taste like sweet cinnamon peach cobbler but some nasty garlic and pepper crap with ruined cinnamon rolls on top of it!  Boy was I wrong, thank goodness!  Thanx Mom for teaching me that just because you fry chicken in your cast iron skillet, if cleaned properly afterwards, you can even bake in it and it won’t taste anything like the breakfast and or dinner you made the day before.

Speaking of “cleaning” your cast iron skillet, let’s talk about that for a moment shall we.  When I found this skillet it pretty much looked like the photo above just with a bit more rust on the inside of it.  I remember my Mom always told me, do not use soap when cleaning that skillet or it will have to be re-seasoned.  I don’t know about you but I really don’t want to go thru all that again!  The first time I “tried” to clean this skillet I used a copper wire scrubber, with soap.  I was starting from scratch and it had gotten pretty sticky and dirty from being up on-top of the kitchen cupboard for who knows how long so I knew it wouldn’t hurt it this time to use soap on it.  After scrubbing the Hell out of that pan for a good 15 – 20 minutes I took a soft cloth and plenty of vegetable oil and coated both sides of the pan then I stuck it in a 350 degree pre-heated oven face down for an hour then, I turned the oven off and let the pan cool down right where it was sitting.  This is how I remembered how to do it or at least I thought.

After I took it out of the oven I was not a happy camper!  There was still that rust ring around the inside of the skillet so, what did I do with it after that?  I left it sitting on the back burner of the stove and or inside the oven when I wasn’t using the oven and I didn’t touch it for just about a year.  Yuppers, I gave up on the damn thing!  If a wire scrubber can’t get rust off of it then nothing will, right!  Wrong, I know, I know, stop shaking your head at me… but at the time I didn’t know this and now I do.  I was also not a big fan of Pinterest back then either like I am now.  I don’t think I could live without it, Pinterest that is.  So, I decided to give it another try after coming across a pin on how to clean and season an old cast iron skillet.  I was looking thru all sorts of camping pins and this one just so happened to be in that category, lucky me!  I am bound and determande to get my family to go camping this summer dang it and the less we have to buy for the trip the better and I sure ain’t taking my non-stick skillets out doors to be put over hot coals, know what I mean.  Now that would be a nasty mess! LOL

Anyhow, the Pin I had clicked on, on Pinterest was a very good one and I will always advise anyone who may ask me, “how do you clean and season a cast iron pan that I got at an antique store?”  The answer?  With Kosher Salt and a Potato, that’s how. 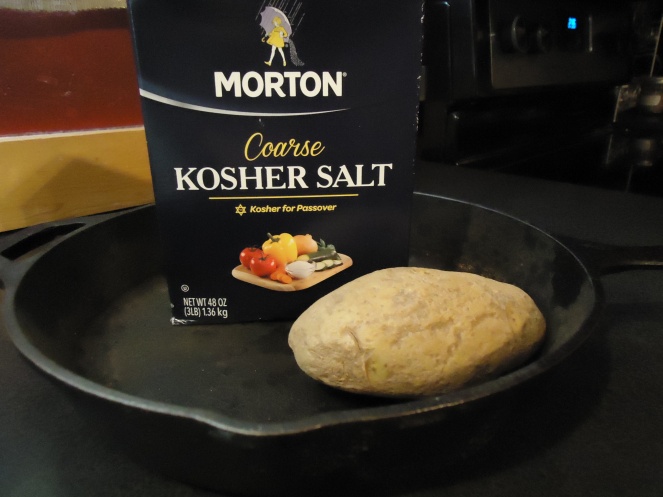 Cut the potato in half and trim (peel), some of the skin away from the cut side of it (where you sliced it in half that is).  Now pour about 1/8th cup of Kosher Salt into the pan and using the freshly cut part of the potato as your scrubber, just start scrubbin away, inside and outside of the pan.  The salt won’t stay on the bottom of the potato so just keep picking it up off the pan with the potato and put it on the salt somewhere else in the pan.  You want to keep an abrasive thing going on here. 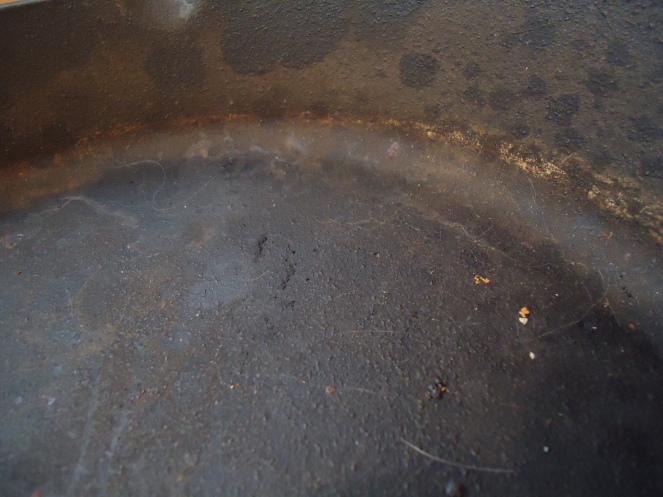 After your arms are worn out from scrubbing, a good 15 minutes or so, wash your pan with very hot soapy water and a sponge.  This will be the first and last time you use any kind of soap in this pan.  Oh, and don’t waste your paper towels on these pans either, they just get cut up and pieces of it will stay in the pan, you don’t want that trust me.

Once you have rinsed the skillet out go ahead and dry it on the stove on medium heat.  You just want the water to dry up but keep an eye on it, don’t let it sit there very long.  You want to make sure you can still handle it once it is dry.

Depending on the size of your skillet, mine was a medium size so I used about 1 Tbsp. of Crisco Oil on it.  I just poured it right into the middle of the pan, took a damp dish towel and rubbed the oil all over the inside and outside of the pan then placed it upside down on a large baking sheet lined with foil and baked it for an hour.  After that hour, turn the oven off but go ahead and leave your skillet in the oven so it can slowly cool down enough for you to handle.  You can even take if off of the baking sheet and turn it over if you like.  Hoping that you didn’t over oil it cause if you did…. What a pain in the butt to have to clean the pan, just on the outside though with hot soapy water so that you can use it and it won’t stick to your glass stove top!  Yup, that’s exactly what I did and boy, just using a little more oil than you need well, it sure does make a sticky mess!!!  When your skillet is all cooled down go ahead and take it out of the oven and look and what you have done…

Viol, you have a nice shiny new cast iron skillet to use.  The very first thing I made in mine was Chicken Fried Steak and they turned out Fantastic!  Even managed to keep the breading on them, shocked me! 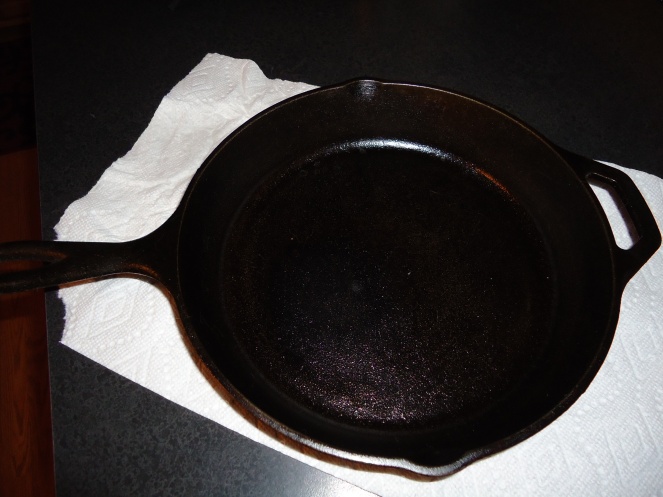 Now I’m ready to go camping!!!  Well, to cook while we are camping anyways. LOL   I love it and I use it all the time now.  Haven’t made desert in it yet but eventually I will and of course I will fill you in on what I made and share it with ya’ll.  🙂

From this old rusty skillet too….

Hi ya'll, I'm Kimmi. Thanx for stopping by. Here's hoping you enjoy cooking and baking up all these recipes as much as I do. What a great way to relax in such beautiful surrounding as the Colorado Mountains! 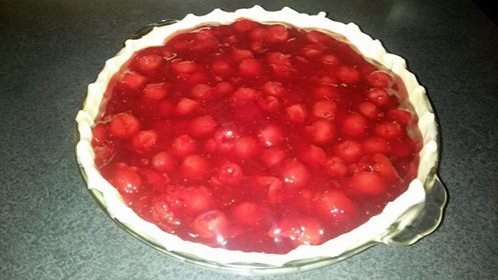 Making your own Vanilla Extract 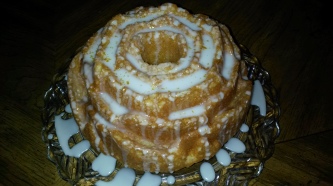